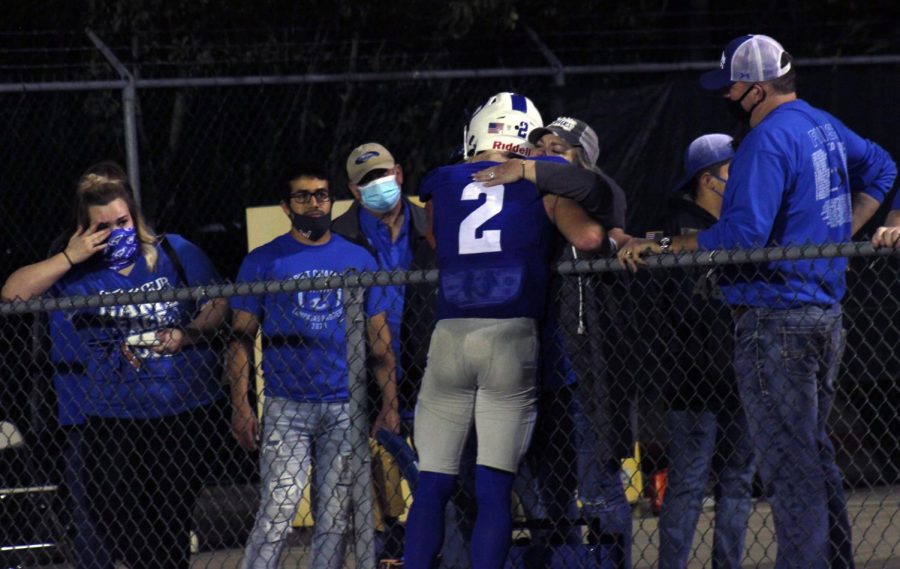 The Lampasas Badgers football team ended their season against the Corpus Christi Miller Buccaneers in San Antonio Nov. 21. CC Miller pulled off the upset against the Badgers, beating Lampasas with a 4th and 1 stop on the 5 yard line to win the game 54-49.

It was a defensive stop for Miller to win the game. The Buccaneers quarterback Andrew Body had 567 yards and gave Miller 8 touchdowns against the Badgers 2nd ranked state team. Lampasas, trailing 54-49, took advantage of a personal foul on Body for making a tackle on the defense and marched down to the 5 yard line, setting up the final fourth down play. On this final play, the Badgers attempted a touch down but were unsuccessful.

It is one of the most gut wrenching feelings knowing the season is over and you’ll never get that back again.”

The Badgers ended the season with a (9-1) record and were the undefeated district champions for the first time since 1925.

The Badgers had 22 graduating seniors this year, who had played football with each other since they were little.

¨It is one of the most gut wrenching feelings knowing the season is over and you’ll never get that back again,” senior Owen Seaver said.

The Badgers had one of the best seasons in years even with the global pandemic happening.

¨I honestly think that we made the most of what has been a terrible year outside of football,¨ Seaver said. ¨We brought a lot of joy to our community but we obviously did not end up where we wanted to, but I think it was a good year.¨

In the middle of the season the team had to go into a mandatory quarantine during their pre-district games because COVID had affected the football team. Despite this, the Badgers finished an undefeated season for the first time in 95 years.

Although COVID affected the football team and took away their homecoming game this year, players still have fun memories of the season.

¨The year went great and I will miss the bus rides with my brothers,¨ senior Cody Hinson said. ¨My most memorable part of the season was the Uvalde game this year in playoffs.¨

The Badgers made football exciting for Lampasas. Only four short years ago, the team was (1-9). Teammates made it their mission to turn around Badger football and put Lampasas into the spotlight.

¨The biggest thing that I will miss is the adrenaline rush of  running out onto Badger Field with my brothers,¨ Seaver said.