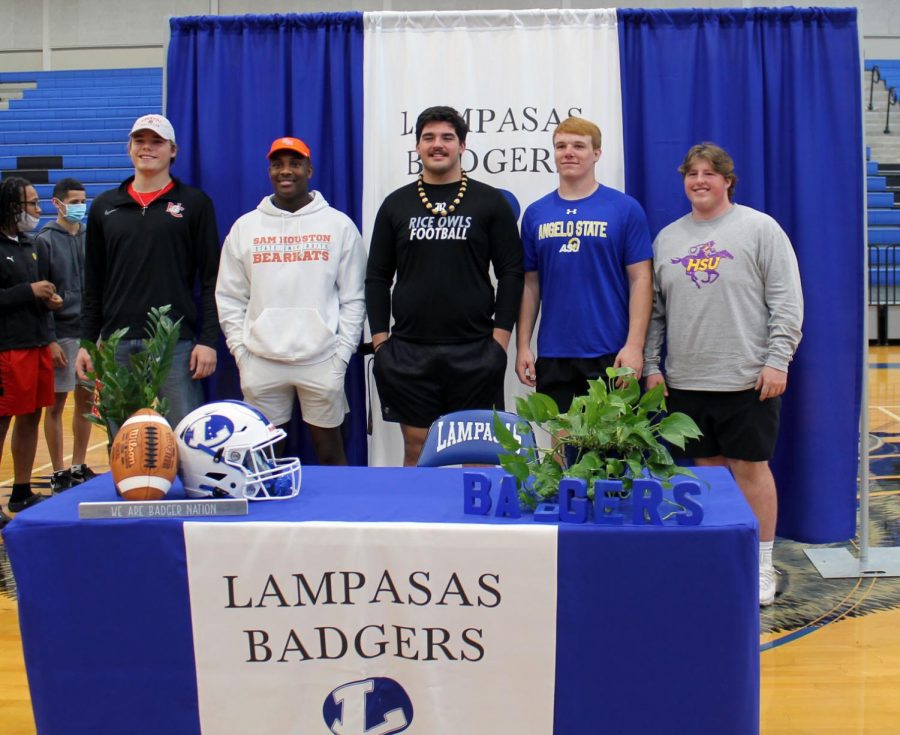 “I’m excited to have the opportunity to play the game I love,” Haviland said.

Haviland signed to play for Navarro College in Corsicana, Texas in the fall.

“The thing that excites me the most about college football is having the chance to compete with some of the best athletes in the country,” Long said.

Long signed to Rice University in Houston, Texas to play in the fall.

My biggest influence would be the town in general. I’ve played in Lampasas since little league and I’ve received nothing but support and talk about how I’m going to do amazing things in college and grow up to be a NFL star.”

Murray signed to play an hour down the road from Long, Sam Houston State University in Huntsville, Texas.

“I wanted to stay close to home,” Murray said.

Murray thanks his mom for all of his recent success, and claims that she’s been there for him his whole life.

“I’m most excited to better myself and continue playing the sport I love most,” Seaver said.

Seaver signed to Angelo State University in San Angelo, Texas. He will be taking after the steps of his brother, who played for ASU in his college years.

“I would consider my brother my biggest influence because he’s someone I really trust and know will give me honest help,” Seaver said.

Waldrip will be playing at Hardin Simmons University in Abilene, Texas in the fall.

“I really loved the campus and they have a winning tradition,” Waldrip said.

The past four years Waldrip has played football with his dad as one of his coaches, so this will be a slight change for him.

“My dad is my biggest influence because he pushes me to be better everyday,” Waldrip said.

The community of Lampasas has been brought together by football the past few years, and these boys played a big part in it.

“My biggest influence would be the town in general,” Long said. “I’ve played in Lampasas since little league and I’ve received nothing but support and talk about how I’m going to do amazing things in college and grow up to be a NFL star. It inspired me to chase my dreams when it came to football.”