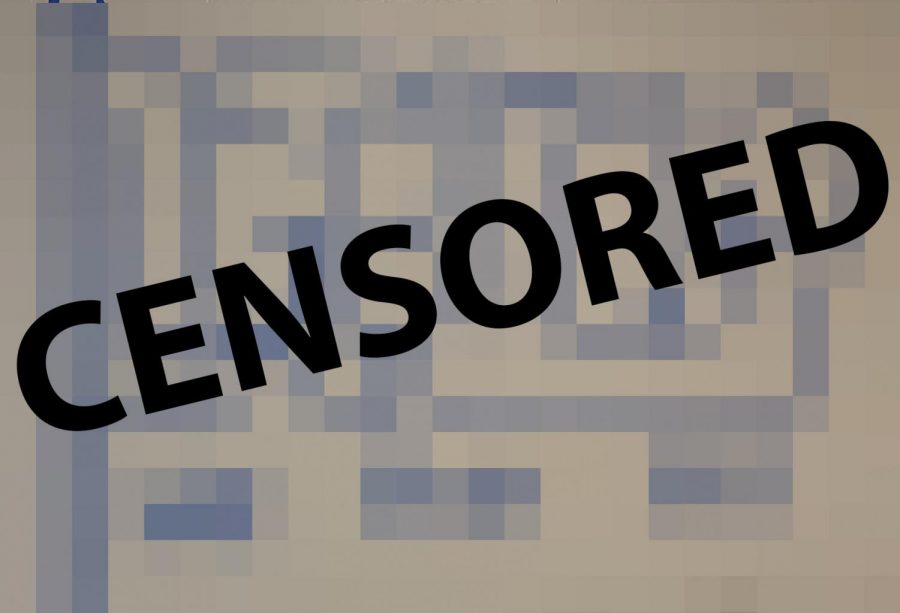 This is a censored image of the LGBTQ+ flag created with tape by art students. Administration took down the piece after unknown students vandalized it.

Administration Should Not Have Taken Down LGBTQ+ Art

The art class created tape art on the walls around the school regarding social issues in order to bring awareness. Near room A232, three students created an art piece representing the LGBTQ+ (lesbian, gay, bisexual, transgender, queer, etc) community. After unknown students vandalized the piece by peeling it off, administrators said the piece had become a distraction and disruption and took it down.

The art should not have been taken down.

It is important that all voices are heard and are treated equally, as it is the American right to do so. According to the Student Press Law Center, schools are only allowed to censor something if it causes a “material and substantial disruption of school activities,” which means that it would have to have a substantial effect on the school. If this is true, then another tape art piece of a large Vuse vape should have been taken down as well. It remained on the wall despite students taking photos with the giant vape for social media and students claiming the artists put it on the wall as a joke. The LGBTQ+ art did not cause such a distraction on that scale, as it only brought awareness to the issue of normalized homophobia, and was not directed towards anybody in particular. That did not stop people from being upset about it for really no reason. LGBTQ+ students should be able to be represented in this community without having to worry about being harassed or silenced due to the school valuing its reputation more than educating those on a serious issue in our society.

Instead of educating those who think it is wrong, the administration decided to take it down so as not to cause fights. When in all reality, it came across as suppressive and makes it seem as though the school does not have its best interest for LGBTQ+ students. Generally, times are changing and every day America becomes more progressive and accepting of LGBTQ+ people, but they are still mistreated and their rights are still being debated. Bigotry and hypocrisy still exist and has been exhibited in this school, as seen when the LGBTQ+  art was vandalized by a student before administration had it removed and when the ‘BLM’ (Black Lives Matter) in a neighboring art piece was ripped off. The full BLM art piece was not taken down by administrators, but it was also not repaired since its vandalization. No action has been taken to reprimand any students who vandalized the piece. While the student that vandalized the LGBTQ+ art piece is unknown, there is no education or announcement to try to let them see their wrongs.

To prevent this from happening again, the school should educate the students and faculty who disagree with that community. LGBTQ+ assemblies could be extremely beneficial to the school to show that people of that community are humans and deserve respect and to be treated as an equal, even if one disagrees with their identity.  The school should do a class assembly with at least one speaker, either from the school or outside of it. The lessons in the assembly should not be a one time deal, either. Character Wednesdays should also have education on the LGBTQ+ community as well. It wouldn’t require much change to the schedule for Character Wednesdays and it would broaden the horizons of what it teaches about how to be a better person.

The art should not have been taken down. Instead the people who dislike it should be educated to not hate on someone just because of who they love or what they identify as. If there was more LGBTQ+ education and representation at this school, then many students would feel much more comfortable and safe.