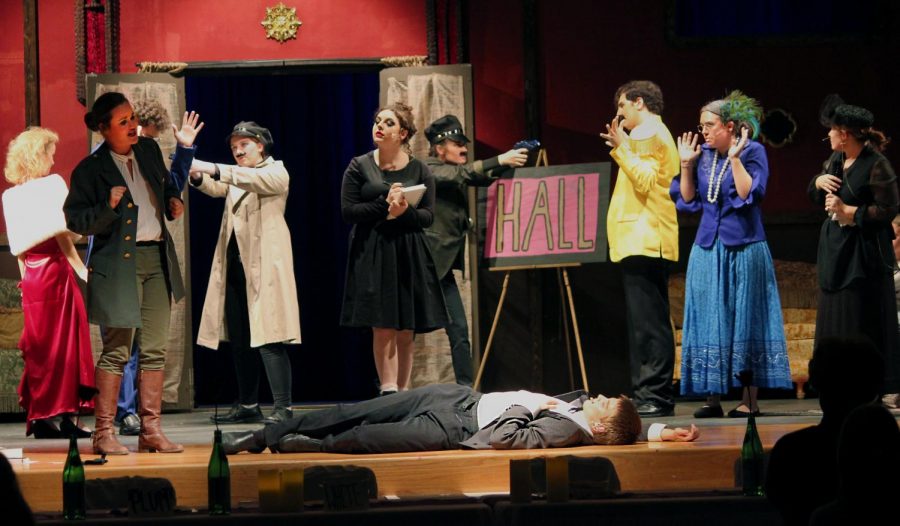 Actors perform as the guest characters reacting to the cop characters arresting them during the Clue performance.

The Lampasas High School Theatre Company, directed by Greta Peterson, produced a theatrical take on the popular board game Clue. The company performed Nov. 14 at 6:30 p.m. and then Nov. 15 with a matinee at 2:00 p.m. and an evening show at 5:00 p.m.

The main plot of the show dealt with seven unrelated guests all being invited to a Gothic New England mansion by an ominous host. As the guests arrived and mingled, they soon found that their host, Mr. Boddy, had blackmailed them, holding them against their will and giving each a weapon before he himself fell dead. The guests then had to solve the case of who the murderer was among them, all while bodies appear and tensions rise.

“We [the theatre company] chose Clue because it was something that we felt could really let us let loose and have fun,” senior Cole Wheeler said. “It’s the kind of show that you read and you immediately know you’re going have a great time with it.”

Especially with Broadway being shut down, it’s really cool that us, as a small town, get to keep doing this.”

“It’s really nice to know all of our hard work paid off,” senior Makayla Osburn said. “We had to make sure we had a show that allowed for social distancing and allowed for certain actors to wear masks and stuff like that, so we had to design our set to accommodate that. It’s crazy to be able to perform [during the pandemic]. Especially with Broadway being shut down, it’s really cool that us, as a small town, get to keep doing this.”

The show was a classic whodunit mystery, with the audience being both entertained with the consistent flow of quirky comments and jokes, as well as the mysterious murder plot that both they and the characters watched unfold before them.

“I’m just excited,” Wheeler said. “I love doing this [performing]. It’s the last time I get to do a fall show. My throat’s dry, but I feel good. This set is the largest we’ve ever had for any show, especially since we’re out in the audience so much. When it comes to COVID-19, having to space people out, having to work around and be around people, it was a lot. But I can tell you, it’s so great to be a part of a program that works so hard to put stuff on even in the face of this [ the pandemic] and to see so many people wear their masks and be safe. It’s fantastic.”