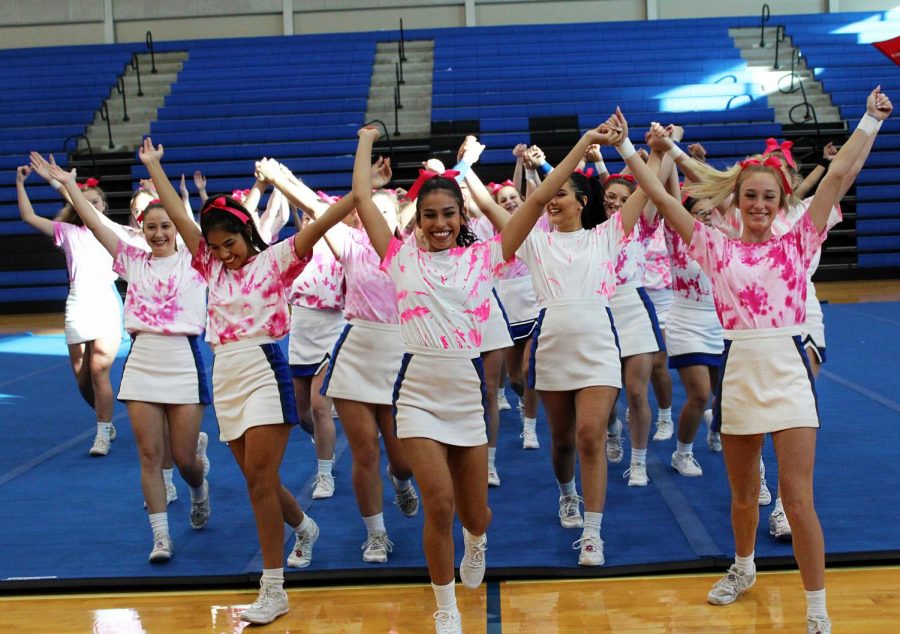 The cheerleaders recors their performance for the “Pink Out” pep rally.

“Virtual pep rallies are the best alternative for our current situation,” cheer coach Shannon Lindsey said. “I, of course, wish we could have real pep rallies, but if this is the way we can make sure all the groups still get a chance to perform and promote school spirit, then I am all for it.”

October is Breast Cancer Awareness Month, and it has become a tradition to have a Pink Out pep rally and game to raise awareness.

“Badger nation is strong and we want those that have fought and are currently fighting this horrible disease to know they aren’t alone, and we stand with them in their fight, as well as honor the ones who are no longer with us,” Lindsey said.

The student body raises awareness by wearing pink to the football games, painting signs that are displayed in the school hallways and performing groups wear pink during the pep rally.

“I believe that wearing pink during the pep rally and during the football game is a great way to show our love and support and bring attention to others in hopes they join us and do the same,” junior Isabel Ybarra said.

The lead film crew members in charge of filming and editing the pep rallies are seniors Ethan Rogers and Shea Marshall.

“It’s definitely trial and error,” Rogers said.  “You record something and realize, oh, I was supposed to get this angle, or I wasn’t supposed to leave that off. Also, it just takes time and patience.”

It’s definitely trial and error. You record something and realize, oh, I was supposed to get this angle, or I wasn’t supposed to leave that off. Also, it just takes time and patience.”

Pep rallies are filmed a week or two in advance so the film crew has enough time to prepare the video.

“One of the main things I have to do is go through all of the film first and splice out different parts in order to make a seamless video,” Marshall said. “Sometimes it can take me just a few periods, but then I have to wait for other people to do their part, so then the days add up.”

“When it came down to putting it together, it got really boring because when you’re there, and there is a crowd, you can feed off of everyone else and then it becomes really interesting, but when it’s just a video of something happening, it can become pretty boring to watch,” Rogers said.

Pep rallies are shown during the academic period, and the link is also posted online for parents to watch. Pep rallies will only be for district games.