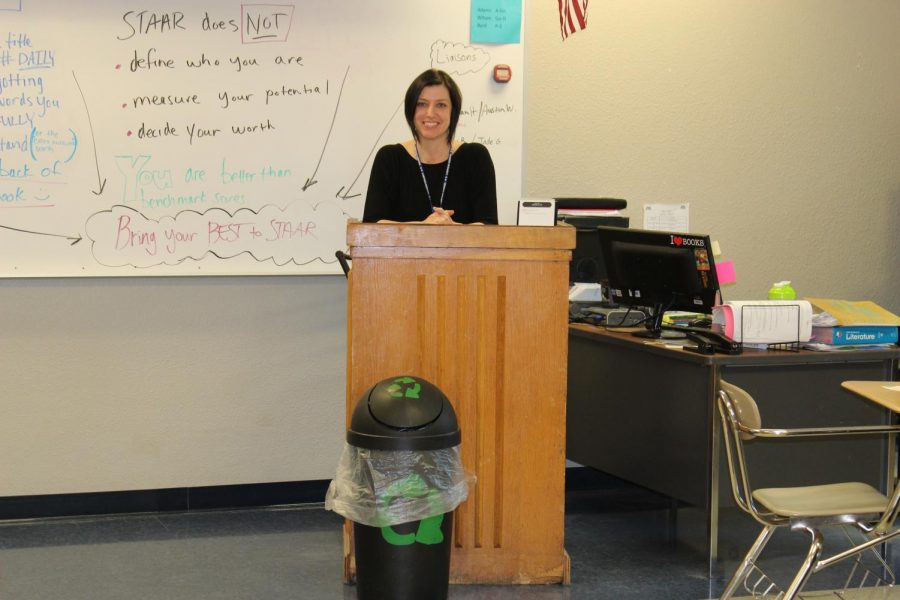 English teacher Jennefer Moore keeps a recycle bin in her classroom in hopes that the high school will begin recycling.

English teacher Jennefer Moore noticed her recycle bin items in the trash can with all other trash at the end of the day.

After a conversation with Principal Joey McQueen regarding why Lampasas doesn’t recycle, the school may look into bringing in recycling.

“I began the year with the ‘recycle bin’ already in the classroom where I teach this year,” Moore said. “It says boldly in white on a black bin, ‘Paper Only,’ and has an appropriately-colored green recycle symbol painted on the opposite side.”

One afternoon Moore saw the janitors cleaning out her room. She watched them pour the paper bin into the regular trash can, realizing that there was no recycling program.

“Residents in Leander, where I reside, pay for recycling even when we don’t use it,” Moore said. “It is part of a responsible culture where I live. It simply didn’t dawn on me that a Lampasas school wouldn’t recycle.”

Some teachers have mentioned that in the past the school did recycle, though there is no longer a recycling program at the high school.

“A custodian told me there isn’t a current protocol in place for separating recycled items from regular trash,” Moore said. “ I realized that if I wanted to actually see that recycling took place from the waste paper in my classroom, I would have to take it to my house. I take a lot of work home, but I have to draw a line at bringing home trash.”

At that point Moore gave up on telling her students to separate their trash. Taking the recyclable trash home to recycle was too much.

“Although I’ve given up on just using it as a recycle bin, I’ve left it in my room with the hopes that it someday will be used as such,” Moore said. “I think it’s an obvious next choice of program for LHS and, hopefully, all of LISD.”