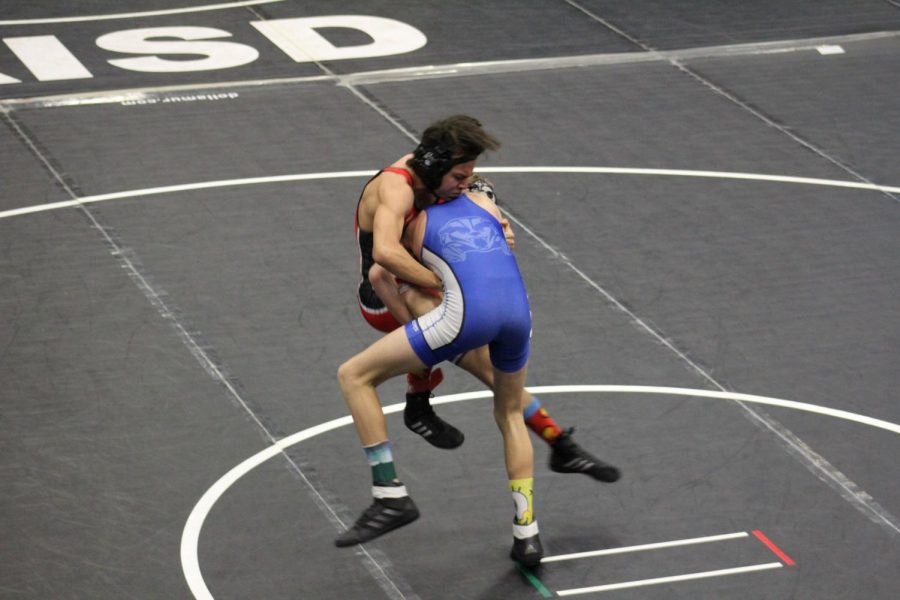 Sophomore Dillon Best does a take-down and achieves victory at the regional meet Feb. 14.

Feb. 14 the wrestling team traveled to Austin to compete in regionals for a chance at state. No one advanced to state but there were memorable moments throughout the season and hard fights that will not be forgotten.

“There are several things I am very proud of about this season,” head coach Elma Garnett said. “I love our team. I love their effort and the heart they gave. Especially with all the changes they had.  We definitely ended the season with a closer bond and what we want for next year.”

Four girls qualified for regionals: Mia Martell, Gracey Ullevig, Taylor Talbert, and Taylyn Smith. Three boys also qualified to wrestle and there was one alternate: Dillon Best, Jonathon Dill, Anthony Harris, and alternate Jacob Miller. Anthony Harris and Dillon Best both moved on to the next day and Anthony Harris placed 6th for his weight class.

“I’m going to have more experience,” Ullevig said. “I feel closer with the wrestling family now so next year will be very fun going back with all of my teammates.”

The team plans to grow their program. This year was the first ever home dual hosted and the first regional placer. Garnett plans to have summer practices for those who want to join next year and she also hopes for two home duals.

There is also club wrestling going on at All Day Fitness on Tuesdays, Wednesdays and Fridays between 6 p.m. and 8 p.m. for younger kids who may want to join in high school.

“I’d like to expose wrestling to Lampasas more so we can grow our team,” assistant coach Donovan Kleckner said. “With the athletes we have now and the work I know they will be putting in I have no doubt the team is going to have success!”