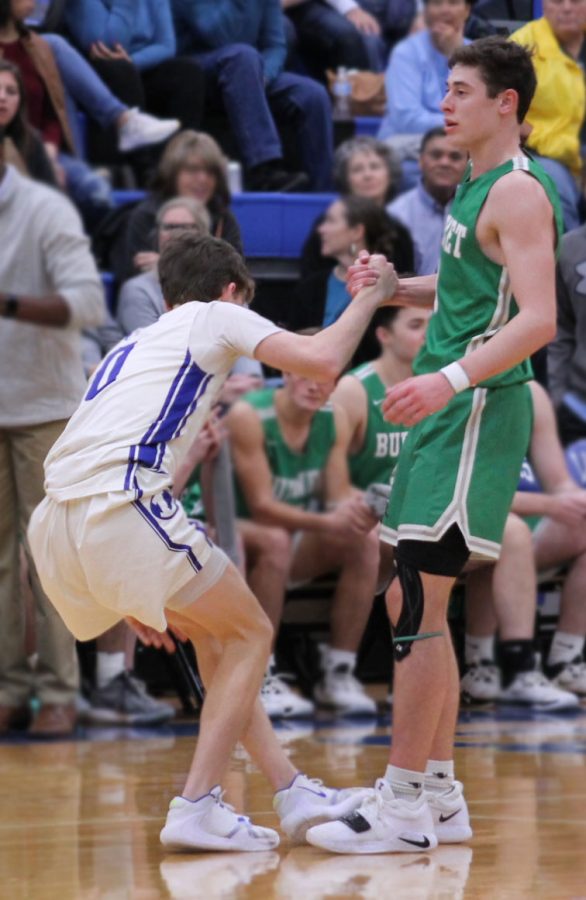 A member of the Burnet basketball team lends a hand to Lampasas player Nate Borchardt during their game Feb. 7. Lampasas beat Beat Burnet 69 -56.

The varsity boys basketball team played against Burnet Friday. This is the second time the teams have gone head to head this year.

Badger Nation dug deep and won the game with a score of 69-56. Junior Mike Murray scored a whopping 26 points.

“Coach moved me to a down low so I could be more successful,” Murray said. “I had a lot of fun, and it felt really good to win. I feel like that was our best game of the season so far.”

The varsity boys worked together to achieve their goal of winning.

“Friday we all came together and stuck to our game plan to get a win against a talented team” sophomore Jett Bramon said. “We attacked their weaknesses and made adjustments when we had to so that we could pull away with a solid win.”

The Badgers play tonight vs Eastside Memorial who they beat 96-17 in January. They are looking to get a shot to have a good record going into playoffs.

“The game went really well,” manager Jeremy Hogeda. “We came in knowing we had to win this game if we wanted to have a chance for playoffs. The first quarter was kind of rocky due to turnovers and less shots going up. We gained momentum to beat our rival, it was a revenge game after falling to them.”