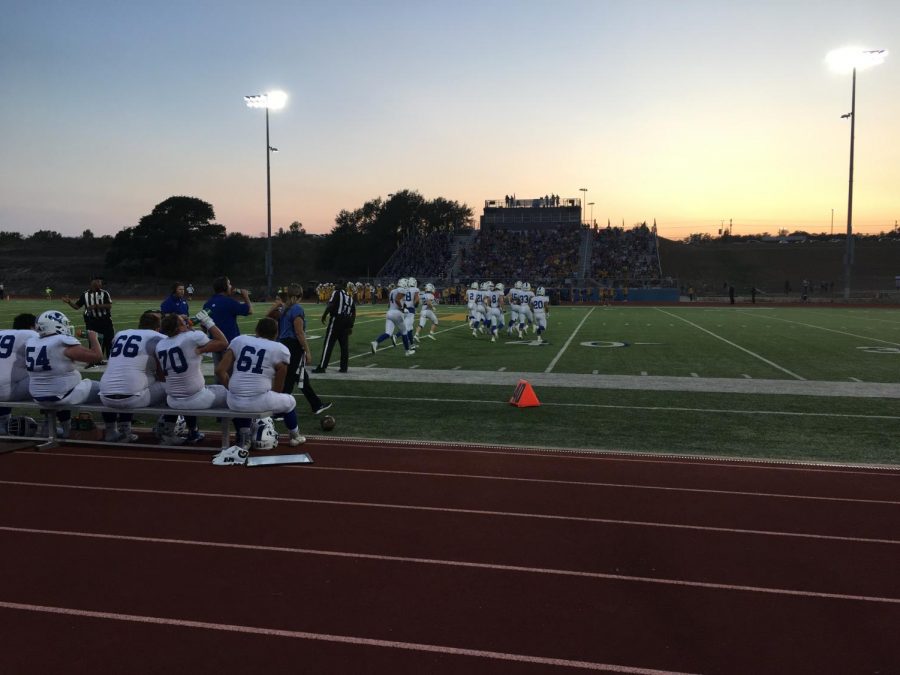 Football players take the field in the first quarter versus the Lago Vista Vikings.

The Badgers came off a great win last week vs Joshua Owls winning 63-14. They had set a gold standard with the first game. This week the Badgers walloped the host Lago Vista Vikings by a count of 66-27 in Friday’s non-league outing.  With the win, Lampasas upgrades its season to 2-0 on the season. The Badgers host Lorena in a non-district outing this Friday.

“ We scouted the Vikings team every day and worked on plays that we thought would work well against them,” quarterback Ace Whitehead said.

The Badgers has kept driving the ball on both offense and defense. Stopping the Vikings multiple times on 3rd down conversions, as well as 4th downs. They were the more physical and dominant team on Friday September 5. The Vikings tried to get onto the Badgers level but ultimately could not find a groove enough to catch them.

“ I think we were able to prepare better than last week because it is the 2nd week of the season and we had film on the Vikings from this year as last week we had film on Joshua from last year,”  Whitehead said.

“ I think we played well, there’s obviously things we can clean up but we were able to play well and get a W, so it was a good night,” Whitehead said.

“I think we are a lot bigger and faster than we were last year and we understand our jobs a lot better,” Whitehead said

“I’m excited for the upcoming games. It’s another chance to go work and compete with my brothers. I am really anxious to show everyone what we have been working for,”  Whitehead said.

In the game vs Lago Vista the Badgers had 59 plays total with 20 first downs.

The Badgers take on Lorena Leopards this Friday at home for Senior Night at Badger Stadium.