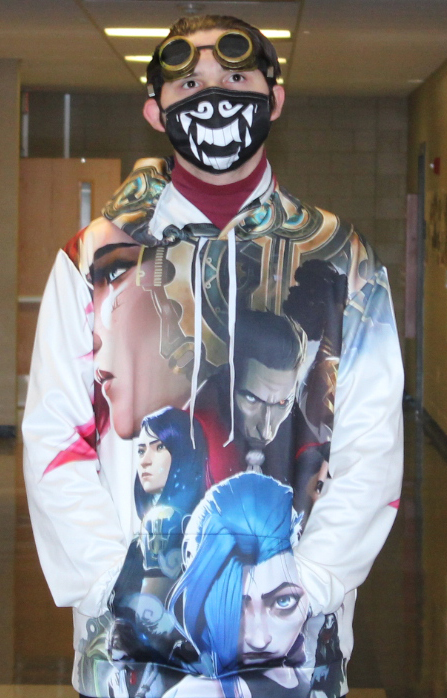 Senior Nicholas Cobb wears a hoodie with characters from the show "Arcane." He also wears goggles inspired by the show.

The Netflix show ‘Arcane’ is based on the League of Legends universe. It was made by the same people who make cutscenes for the games based in that universe. In the show, two sisters have to deal with the wrath of the enforcers. They steal powerful stones that have the ability to make devastating weapons. These sisters must make tough choices to survive in the twin city-states of Piltover and Zaun.

People should watch this show because of its wonderful visuals, music and story.

I first found this show over the winter break, and I can’t stop thinking about it since. I did not expect much from this show at a first glance. I was bored and was looking for something to watch. When I hit play, I was amazed by the amount of effort and detail in the visuals. Every shot looks like a beautiful painting given life. The animations are realistic. The facial expressions are vivid and candid.

When the first song, ‘Playground’, played, I was blown away with the way it switches from compelling story to music video easily. Each song is perfect for the scene that it goes along with. The makers of the show have done music videos for years, so they were prepared to make this show.

The story is split into three acts. Each act has three episodes. When I watched the show, I simply sat there for hours. I only got up to get food or go to the restroom. The characters are well done. Each character feels like a real person that you could relate to.

Some people might not like the show due to its use of adult themes. Even though the show is made for ages 14+, it contains scenes that are more mature in nature. In particular, there is one scene where there is sexual content. However, it can be easily skipped and the viewer would not miss a thing.

People should watch this show for its astounding visuals, music and story.