Sitting For Pledge Is Fair Protest For Social Injustice 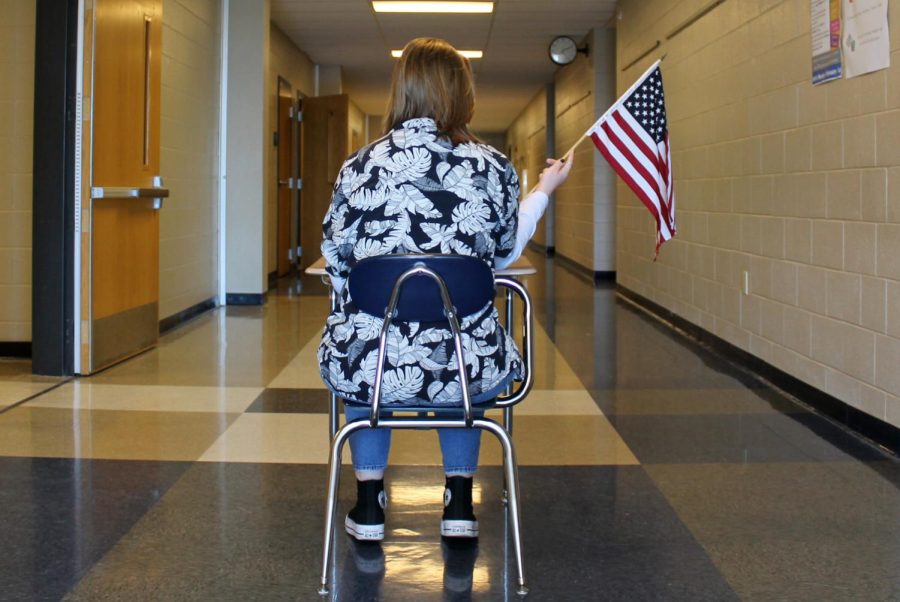 Students are protected by the first amendment to peacefully protest by sitting during the Pledge of Allegiance if they choose.

Students standing for and reciting the Pledge of Allegiance has been a long-standing tradition among schools across the nation. A debate about this arose recently in light of many social justice issues such as racial injustice, criminal injustice, sexism, homophobia and the simple realization that “liberty and justice for all” doesn’t apply to those who fail to fit society’s standards.
Students legally are not required to stand or recite the Pledge of Allegiance, so teachers and other students should not ridicule them for choosing not to stand in response to social injustice.
Students enjoy the luxury of having the freedom to decide whether or not they will participate in the daily recitation of the Pledge of Allegiance despite the fact that if they choose not to participate, they are judged and shamed, ultimately making them feel forced to conform to society’s standards. Some students are opposed to participating as a form of protest. Racial injustice is one the most predominant social issues stigmatized until recently in light of the Black Lives Matter protests. Racial injustice is one of the biggest causes of protesting through the refusal of reciting the Pledge of Allegiance. According to Statista, in 2020 there were 3,915 hate crimes committed against African Americans, 1,082 against White Americans, 693 against Hispanic or Latino Americans, 342 against Asian Americans and 848 against other race/ethnicity/ancestry groups. Two of the most prevalently targeted races in 2020 consist of only 19.3% of all Americans. This is a direct example of not fitting American society’s standards and its consequences. These hate crimes prove that if an individual is not white, they are not represented by the Pledge of Allegiance. Liberty is defined as the state of being free within society from oppressive restrictions imposed by authority on one’s way of life, behavior, or political views. Justice is defined as the quality of being fair and reasonable. Minorities are oppressed, the LGBTQ+ community is ostracized and in some cases oppressed as well. If the government and society are not doing all they can to accommodate these groups and provide justice for all, then all American people are not represented by the Pledge of Allegiance.
In 1954, during the Cold War, in order to distinguish the United States from atheistic communist and Marxist countries, president Eisenhower encouraged Congress to add the phrase “under God” to the Pledge of Allegiance. Students that fit into certain demographics are already somewhat reluctant to recite the pledge due to underlying issues that America faces, and the inclusion of “under God” in the pledge causes even more reluctance for those with differing religous beliefs. Including “under God” to some degree negates the Pledge’s “One nation, indivisible, with liberty and justice for all” because many atheist, unaffiliated and other religious Americans are left under the impression that if they don’t believe in God or support a different superior being then they aren’t, once again, represented in America. Not only does it lead them to feel unsupported, in some cases it also goes against their religions and values.
Many individuals opposed to students having the freedom to choose to stand or not believe that sitting during the pledge is a sign of disrespect. They believe the act of standing, placing one’s hand over their heart and reciting the pledge symbolizes that veterans’ work does not go unnoticed and honors all soldiers. However, if a citizen does not agree with how the American government treats some of its people, they should be able to respectively protest by choosing not to stand. There are numerous ways fallen soldiers, veterans and currently employed soldiers are honored. Refusal to stand for the Pledge shouldn’t be seen as a sign of disrespect, rather as taking advantage of the first amendment to support one’s values and the refusal to endorse the actions of the government.
Black Lives Matter protests, Women’s Rights protests, Pro-Choice protests and various other protests have been seen as violent or unnecessary due to the lack of white cisgendered male support. Some of the same people who claim it is disrespectful to sit during the pledge, believe the violent insurrection at the Capitol on Jan. 6, 2020 was acceptable. It is convenient for them to defend a riot or protest based on emotions and a concept that they believe in.
Everyone in America is protected by the Bill of Rights. The first amendment protects every American citizen’s right to assemble and express their views through protest, whether it be through silent protesting such as sitting for the Pledge of Allegiance or marching through the streets. Acts of protest are seen as a cause of division within American society when it is simply individuals exercising their first amendment rights. Unjust actions committed by the American government and the military should not be overlooked. The oppression of minorities, racism, homophobia, discrimination, occupational segregation, the wage gap, the broken criminal justice system and so many more examples of the government letting us down still exist, meaning there are still reasons to protest by sitting during the Pledge of Allegiance. There is no obligation to participate in an ideological ritual such as standing for the pledge.
The pledge is simply an oath of fidelity and allegiance to the United States of America, which is purely symbolic. America contains a myriad of issues, in which the disapproval of these issues can be expressed through sitting during the pledge. This should not be seen as disrespectful. This should be seen as students utilizing their first amendment rights. The stigma surrounding this act makes students feel as though they should not be practicing their right to protest. Some students do not refuse to stand for the pledge out of acts of laziness. There are factors that contribute to the ultimate decision to make that statement which should be respected, just as much as any student who may stand. It is a choice, therefore students should not be ridiculed or judged or feel pressured to stand.