Opinion: Hallway Is Like Road –Walk On Right To Maintain Order 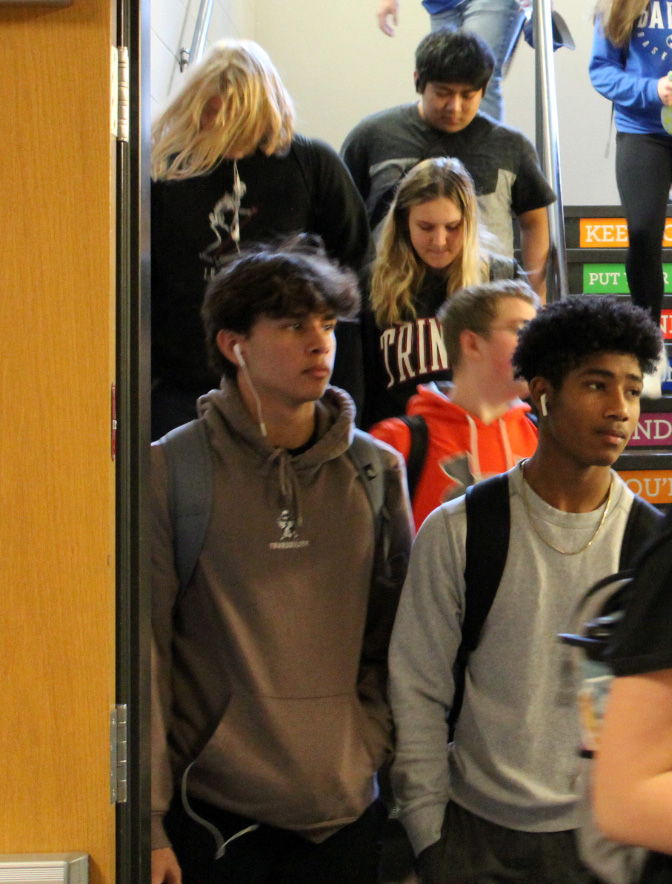 Many students walk down the stairs between classes Dec. 14.

Fifth period ends and a stampede comprising half the school comes racing down the stairs.

And these students are just that, a stampede. It is anything but orderly.

Students, who are not lucky enough to have A lunch, ascend the stairs to their sixth period, only to be shoved to the rightmost side of the hallway as the rush barrels past.

The stairs are like a road. There’s a dividing line in the middle that students should respect as the double yellow line is on a road. When ascending the stairs, it’s important to stay on the right side so traffic can move smoothly. Traffic would flow a lot smoother if people going down stayed on their side and people going up didn’t have to move out of the way. Just like if you’re driving on your side and a car was in your lane coming right at you and you had to swerve to get out of the way. Don’t be rude, lunch will still be there when you get there. There is no need to rush.

The main reason you should stay to the right is that it’s a respect thing. When someone is coming up the stairs, don’t walk down right in front of them and make them move when they’re walking on the correct side of the middle railing.

Some may say that there are more people coming down than going up and that they need more room. This is true, but people going up have to get to class. There is no attendance at lunch, so it’s not necessary to rush to the cafeteria, where as students going to class do need to be to their class on time.

In conclusion, people should stay on the right side of the stairs or hallway because it’s the respectful thing to do, traffic would flow more smoothly, and there’s no need to rush in the first place.