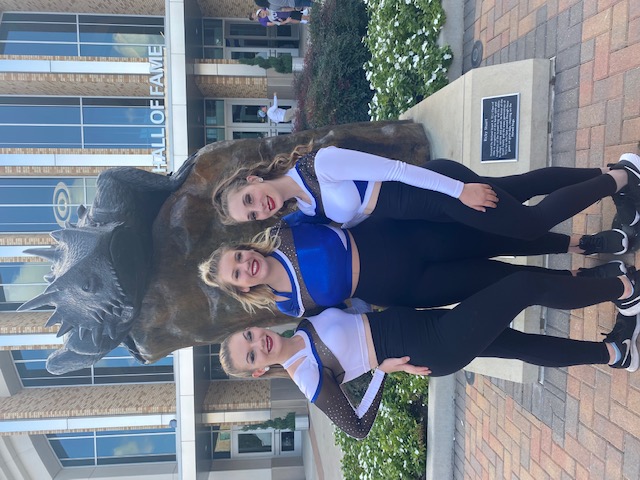 Thousands of people drenched in purple and white loudly cheer as the Lampasas High School Flames make their way onto theTexas Christian University football field. Within this group is freshman Maddy Moreland. She is filled with adrenaline. She looks around, and for the first time, thousands of people look back at her. The music starts and she begins to dance.

The Flames performed during a TCU halftime show at the Amon G. Carter Stadium Oct. 23.

“Being able to perform in front of such a large crowd was an amazing experience,” Moreland said. “There are no words to describe the feeling.”

The opportunity was presented to the Flames about five weeks prior to the game.

“We were sent an e-mail by the coordinator of the half time production and she asked if we would be interested in performing in the halftime show,” Flames coach Shelby Hodnett said.

The Flame members were ecstatic when they found out about this opportunity.

“When Mrs. Hodnett had told us she told us that it was a maybe and we shouldn’t get too excited, I got excited anyway,” Moreland said.

TCU sent a routine for the Flames to practice for the halftime show. They practiced this dance for about two weeks.

“The dance sent out by TCU was fairly simple when it came to choreography, yet for some reason I was still so nervous when it came to memorizing and performing it,” Moreland said.

Moreland spent the week before the game practicing the choreography any moment she could.

“Even during the first quarter of the game I was constantly going over it in my head,” Moreland said.

This opportunity allowed the girls to get some college experience that may be needed in their future.

“I really hope we have the opportunity to do it again next year,” Hodnett said. “I think it’s good for high school students to experience the college experience. It inspires them to want to pursue college if they choose not to go to a trade school.”

As well as performing, the Flames met some of the dancers who regularly perform during TCU halftime shows.

“The overall experience was perfect,” Moreland said. “The actual game was crazy. I have never personally been to a college football game so just being in the gigantic stadium, with fireworks constantly going off, and seeing all the very spirited fans in purple and white was amazing.”