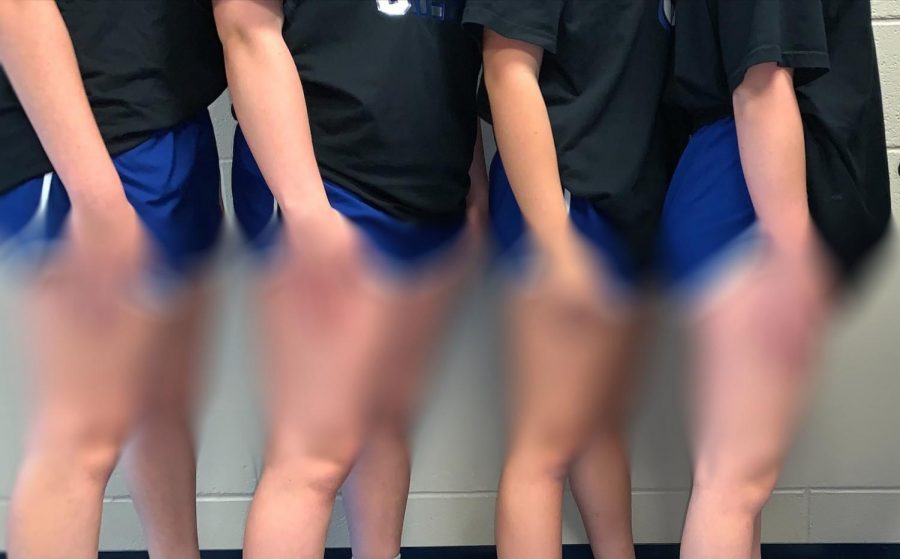 Female athletes are allowed to wear wind shorts during team practice and while playing a sport but not to class.

Dress codes have been enforced in high schools for many years, and it is typically based on prohibiting anything that seems to be distracting, or anything that sticks out from the norm.

The high school is strictly enforcing the dress code this year after two years of leniency due to COVID, however, there is a gray area with the dress code that is causing controversy among students and staff members.

The district should not enforce a strict dress code in high school because it limits the way students are allowed to express themselves, creates a sexist and discriminating environment and affects students in a negative way. Times are changing, and it is time for a realistic and updated dress code.

Hair color, piercings, facial hair and other body modifications, such as tattoos, are all examples of students expressing themselves and their personality. The dress code states “tattoos must not be visible…male students shall be clean shaven” and “hair coloring should be of natural coloring.”

Tattoos have become common throughout the years, and it is not a surprise to people when they see someone with them. Tattoos are not seen as trashy or inappropriate as they may have been seen a long time ago. Exposure to tattoos in school does not disrupt the educational environment, but instead allows students to express themselves in a modern way.

Facial hair on men is natural, and they should not be forced to shave what they cannot control. Denying education, school events and graduation from young men due to their facial hair is outrageous and morally wrong. Facial hair is a way for men to express themselves and be proud of their maturity.

Lastly, hair color is one of the greatest ways students express themselves. From low lights to vibrant colors, our student body has grown to notice it as socially acceptable. Other schools, such as our neighboring district Killeen ISD, allow their teachers and students to come to school with colors other than natural. These examples pulled directly from the dress code are not realistic and up to date with this generation, and it is time to change that.

The dress code targets females more than males for multiple reasons. Even school administration admits that the girls have more opportunities to be dress-coded because of the different types of clothing they wear as opposed to what the boys wear. However, females are treated as if their body were created for the male’s gaze and should be covered up, and that is why females have more opportunities to be dress coded. “Clothing that exposes bare midriffs, and/or undergarments” is deemed inappropriate  in the dress code. Undergarments, such as bras that support the parts of the female’s body, are not anywhere close to inappropriate. It’s a necessary clothing material to support what has grown naturally, not something to arouse the classroom. Dress-coding students due to exposure of their bra straps is ironic because females can also be dress coded for the absence of undergarments. It is not the schools right to tell a female what undergarment they can wear or not wear.

The dress code also says that “Girls’ dresses, skirts, all split garments, and shorts must be long enough to prevent inappropriate exposure whether sitting, standing, or performing other normal school activities.” Commonly understood unpermitted shorts are wind shorts/running shorts. Wind shorts cover all inappropriate areas without having to be fingertip length. Young men also wear shorts not in dress code, but this rule is most often directed only toward girls. The dress code is singling out females to cover up and allows young men to wear comfortable, short, athletic shorts with fewer issues. No where in the dress code does it address the young men who roll their shorts to make them shorter to accentuate their legs, buttocks, and front.

“Tops and shirts worn with leggings or tight-fitting pants must cover the hip and buttocks area” is also targeted directly at females. Nowhere does it state for the shirt to cover the “front” because this rule apparently doesn’t apply to young men. Females with curves will be dress-coded before they even make it through the front doors because exposure of a female’s buttocks is said to distract the boys and disrupt the educational environment. Teaching young women to cover up instead of teaching young men to be respectful is one of the causes for sexual assault and rape, and that is creating a terrifying environment for the future of all women.

Enforcing a strict dress code in high school is harmful to the students in multiple ways because it is not creating a safe place for students to grow and mature in a healthy way. The dress code is targeted strictly towards females, forcing them to cover up, and let young men walk around almost freely. It is time to change and update the dress code to fit today’s social norms in society, and to allow females the freedom to dress more freely without being told their body is distracting in the classroom. Teach men to be respectful, not women to cover up.