Wrestling To Compete at Regional Meet Tomorrow After Uncertain Season 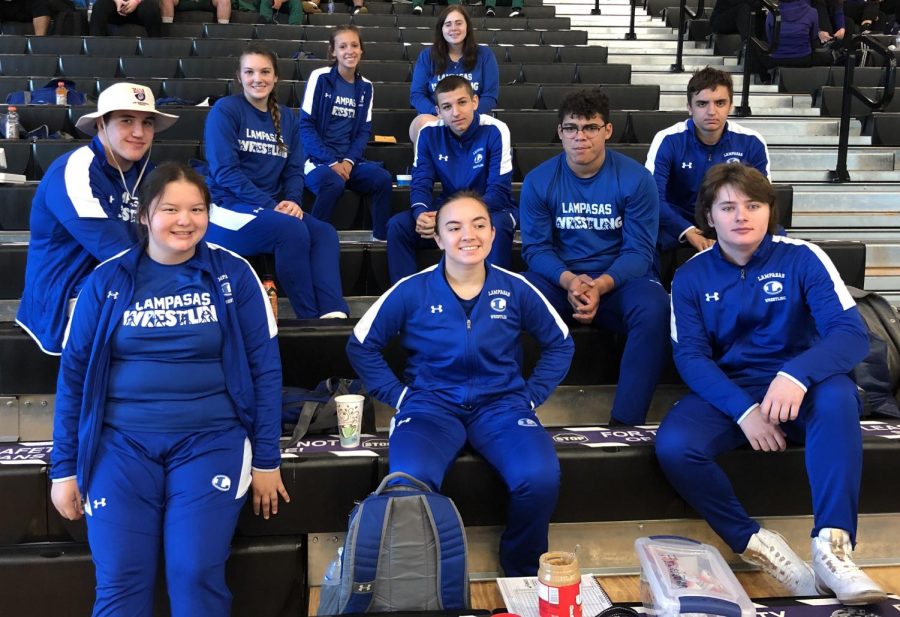 The varsity wrestling team sits together at the District meet in College Station April 9.

The varsity wrestling team will compete at the Regional meet in Anna, Texas  tomorrow.

“We had a great season,” wrestling coach Donovan Kleckner said. “The amount of growth we have seen from each wrestler this year has been outstanding! Some wrestlers got their first ever win this year. It was a joy to see their hard work pay off. Our veterans continued to win and continue their success in the postseason.”

The year has been different because of COVID, but Kleckner says the coaches did a great job with the difficult season.

“We almost didn’t have a season this year due to COVID, but once we found out we could, we tried to jump on the mat as fast as possible,” he said. “Coach Garnett did an amazing job finding the wrestlers plenty of matches. Also, with the help from Coach Rogers, we were able to have our own wrestling room to run practices in. A lot of help went into this season to make it successful, and I know the kids appreciate it!”

Head wrestling coach Elma Garnett has had to deal with the possibility of the season not happening, but she feels prepared.

“It has been fast and furious,” Garnett said. “We went from the possibilities of not having a season to breezing through one in 6 weeks. Our qualifiers are excited. I believe for two reasons… We are somewhere new this year for regionals, in Anna, Texas. The other being that they finally get to go somewhere and feel somewhat normal. This school year started off so different.”

While Garnett has been teaching longer than her head coach position of two years, she enjoys it and likes the sport.

“We have conditioned a lot,” Garnett said. “If you are not a wrestler, you wouldn’t know how conditioned you need to be to go 3 rounds.  You have to be a hard person, mentally and physically.  I am new to this sport and have gained so much respect for it.”

Senior Mia Martell hopes to do well in regionals this season.

“It’s important that I succeed in regionals this year because this is my last year,” Martell said. “I want to be the first girl to go to state in Lampasas for wrestling and if I don’t, then these are my last matches.”