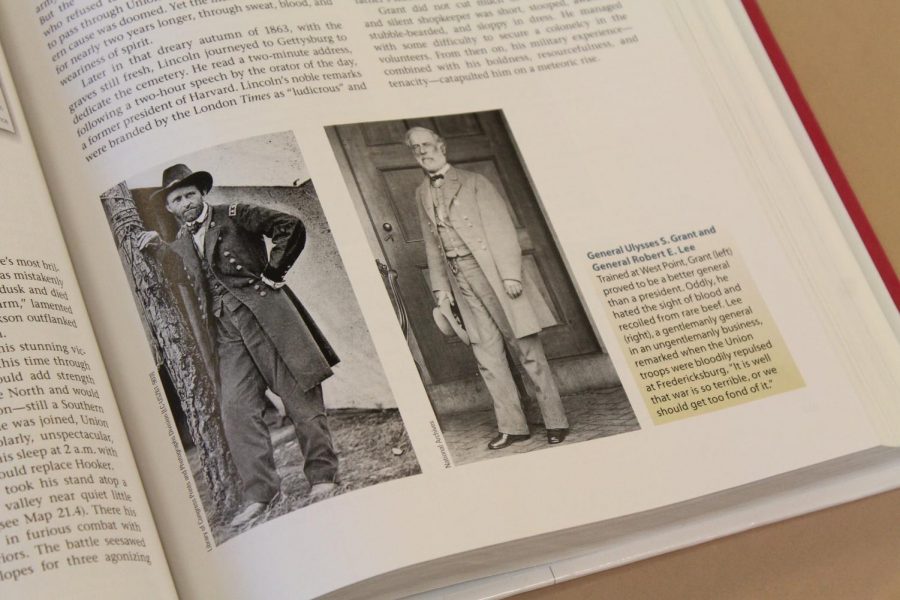 These are photos of Ulysses S. Grant and Robert E. Lee in the American Pageant textbook. If cancel culture continues, could images like these be removed from future textbooks?

Statues removed. Companies boycotted. Celebrities dethroned. These are just a few of the results from a culture in which, if one does not adhere to social norms or political correctness, they are effectively removed from every major platform. This culture, where logic and facts are trumped by political bias and mob rule, is “cancel culture”.

Not only has this culture ruined the sanctity of free speech on both large and small scales, it has also birthed a rejection and censorship of history among the masses, and it will only get worse.

An obvious and controversial subject that has been stained with cancel culture is the matter of historical figures and any structures created to recognize them. Some of the figures targeted include Christopher Columbus, Thomas Jefferson, Jefferson Davis, Robert E. Lee as well as Abraham Lincoln and George Washington. Every high school student hears these names in their social studies courses, and every student is taught what their story is and why their names were immortalized in texts. These men, right or wrong, made this country into what it is today. Wicked or righteous, American culture has been heavily influenced by these men and many others, whether it be city names, schools, roads, ideas or even as far as surnames. The cancellation and censorship of these names is as equally ignorant as it is dangerous. The practice of renaming buildings, removing statues and omitting individuals from history classes have gained steam, with many organizations fearing being labeled as racists and bigots by a movement that has no comprehension of history or facts.

This purging of historical figures and their stories does not wipe away the mistakes and even atrocities that they made, but instead, it covers them up for future generations to forget. History is taught to inform people on the trials, errors and successes of the human race that have molded our society into what it is today. People need to know of evils such as slavery, genocide and oppression. The future generations need to know that these conflicts are unjust and unacceptable, or they may be left to their own discretion as to whether the acts are right or wrong. As philosopher George Santayana once wrote, “Those who forget history are condemned to repeat it,” and that is what will in fact happen if this culture continues.

It is easy to think that future generations would be able to know societal rights and wrongs. However, we should not flatter ourselves. The very reason the sin of slavery was repeated throughout our past is because no one remembered. People were nowhere near as educated as society is now. Only a select few knew any sort of history, and those that did were limited on their knowledge. Today, we have the privilege of being able to find information in seconds, yet, ironically, we seem to collectively know as much as our ancestors did.