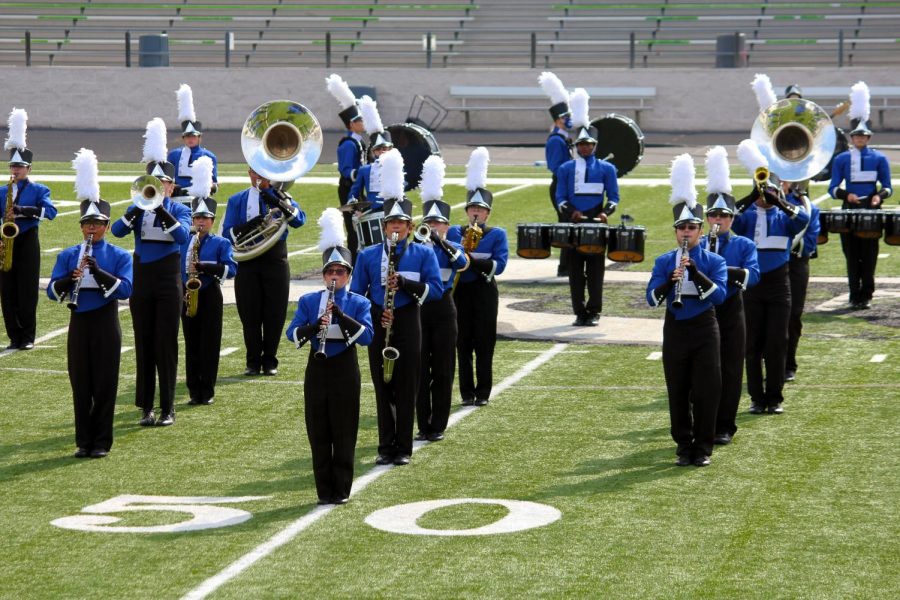 The band performs at a competition in Burnet Nov. 14. They earned a Division Two which is the second highest rating.

The marching band had a competition Nov. 14 in Burnet and earned the second highest rating.

“I think it went pretty well,” band director Eduardo Zambrano said.  “Considering the circumstances that we are dealing with, it went pretty well. We got a Division Two which is the second highest rating. Between the change of shows and the change of drills, we have had about three to four weeks to prepare for this, so getting a two was pretty good.”

Due to COVID-19 and some students being virtual and some being in-person, attendance has been a struggle.

“COVID impacted our attendance for practices, and a lot of people dropped out because of it,” Zambrano said. “It has been the biggest struggle with getting kids to go to practice especially when it comes to them being virtual and being in-person. Participation would have changed the outcome a lot. Dealing with 15 to 20 kids being absent every practice killed it just because we were having to go back and reteach stuff a lot.”

Band usually has more competitions, but this is the only one this year.

“Because of COVID, we only have one competition,” junior Saydie Smith said.

“We normally have about six or seven other ones that we’re invited to but this year we only had one. The band did not do too bad with having Division Two.”

Bands can earn a score of one through five at competitions, one being the highest score and five being the lowest.

Sophomore Cameron Parker does think that in order for them to have placed higher they could have practiced more, but he is a bit relieved it is over.

“Practicing more, especially in the first few weeks of practice, we could have worked on more fundamental things so the freshmen could get better, and for us to get better as well,” Parker said. “I mean I’ve kind of been bummed out about the results, because it would have been nice to go to state this year, but I am glad it is over as well.”