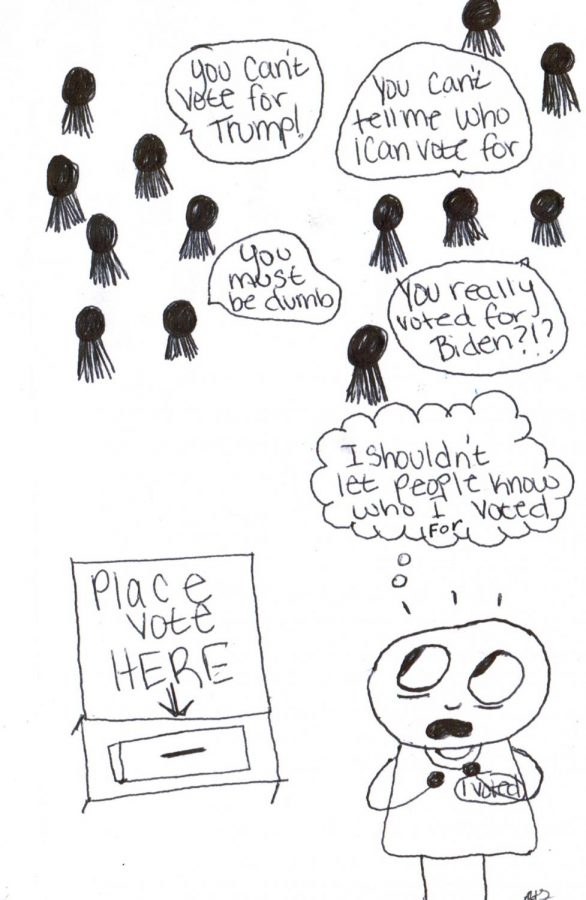 The division that the country currently faces is not of opposing interpretations on how to enact certain policies, but rather, of which side is “right” and “wrong” or which side is “offensive” or “stupid."

With the upcoming presidential election, COVID-19 pandemic and the violent clashes between protesters and law enforcement, political amnesty is at a height comparable to that of the Civil War era. This divisive nature of the times has birthed a political philosophy that revolves around the use of personal traits and opinions, rather than facts, causing an unnecessary incorporation of emotions in politics.

Ever since the advent of political parties in the young United States, between Alexander Hamilton’s Federalists and Thomas Jefferson’s Democratic-Republicans, the choice to identify oneself with a particular party has developed into a strange, undying loyalty to a group, usually on the basis of a few common principles. Political parties have always had the trend of either being absolute polar opposites on the political spectrum, or both being fairly moderate, with a few key differences.

Nonetheless, the unique division among Americans has been long-lived, whether it be North and South, free and slave or Democrat and Republican.

However, the division that the country currently faces is not of opposing interpretations on how to enact certain policies, but rather, of which side is “right” and “wrong” or which side is “offensive” or “stupid.” This closed-minded view therefore causes heated arguments between people of opposing parties, often based on a politician’s characteristics or political correctness.

The stage for this emotional-political  hurricane was set in previous years and elections, rooted in the over-stimulation and plethora of information that Americans have access to in the 21st-century.  Ironically, the invention of the internet and the smartphone have led to the rise in Americans who are uneducated in civics and politics, thus, leading to a generally less-informed populous of anger-driven citizens.

Additionally, the new incorporation of “politically correct” terms has contributed to the volatile political scene. The risk of “misgendering” or “offending” a particular person or persons has almost become guaranteed when interacting with others in public, whether it be intentional or not. Ignorance on appropriate terms is usually the culprit behind conflict, but the excessive demand of “proper terms”, which can be very numerous, is also a contributing factor.

This mix of offended and uneducated individuals is what develops the toxic political environment we see today. No longer is it an argument of how to properly balance the nation’s checkbook; it is now a mudslinging battle with personal jabs and pettiness, rooted in spite and the rejection of facts in favor of opinions.

What needs to be said is that facts do not care about feelings; never have and never will. Americans, teens and millennials especially, who take to the streets and protest or bully those of opposing viewpoints are the problem in society. These groups are selfish in nature, wanting immediate satisfaction and throwing fits when they do not get what they want, whether they be Republican or Democrat, and would much rather watch the rest of the country burn so long as they are comfortable.

No longer can two individuals of opposing views have a civil conversation without being labeled a traitor, idiot or sell-out. The beautiful melting pot of ideas and beliefs that America alone is associated with is under attack by tribal politics and its violent symptoms.

The peaceful and well-informed discussions need to be revived and normalized once again, and the blind ignorance of hating opposite parties and politicians must be eradicated. Whichever party claims the presidency this year, the American people need to remember that it does not matter who is in power, for the United States of America is a nation governed by the people, for the people, and those people must be unified in order to prosper.