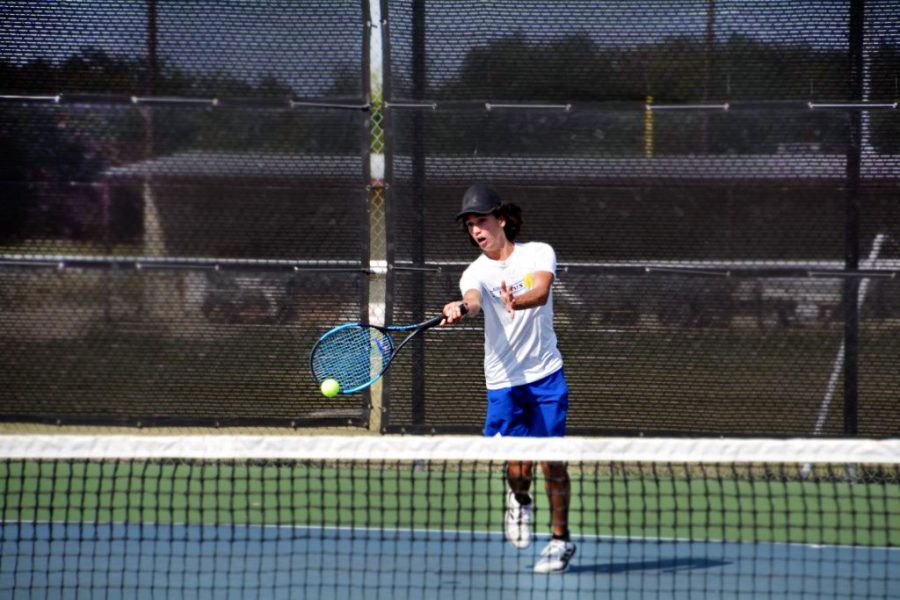 Tennis practice began Aug. 3, and their first match was Aug. 22.

“So far, we’ve only got to play two matches,” tennis coach Kenneth Peiser said. “Our districts start next week, and so we have not got to play enough practice matches before we start district.”

The team will start regionals in a month.

“We’ve got four different matches, and so we’re shooting for one of the top spots, of course, so we should finish somewhere in the top three,” Peiser said. “And then we’ll start regionals in October.”

Sophomore Sam Zmolik is excited for the new season and is confident that the team will do well and improve this year.

“The season is going really well so far,” Zmolik said. “Overall, we are about half of the original varsity team from last year, so the people that moved up have had a different experience. However, they are working really hard, as we all are, to make this a great year!”

Every year comes with goals, and Zmolik’s goals are to become a stronger player by practicing more and working on his playing.

“My goals for this year are really to work on my consistency and power,” Zmolik said. “Instead of getting nervous or anxious, the more I just play my game, the better I will do.”

There was a match against Burnet Aug. 28 . Burnet did not have enough players,  but it was still good practice for the team.

“My match went fairly well,” junior Kailr Clements said. “There was a lot of pressure since my partner and I are still getting used to playing tournaments. We still pulled through and keep getting better as we go along.”

Practice makes perfect, and Clements agrees with that statement.

“As the team moves along through the year I believe we’ll get better and better,” Clements said. “The more we practice, the stronger we’ll get on the court.”

The new year provides new opponents as now the school is in a different region.

“I’m not too sure how the season is going to go,” junior Elias Arellano said. “We’re in a different region now, so we will play some new schools that we didn’t play last year.”