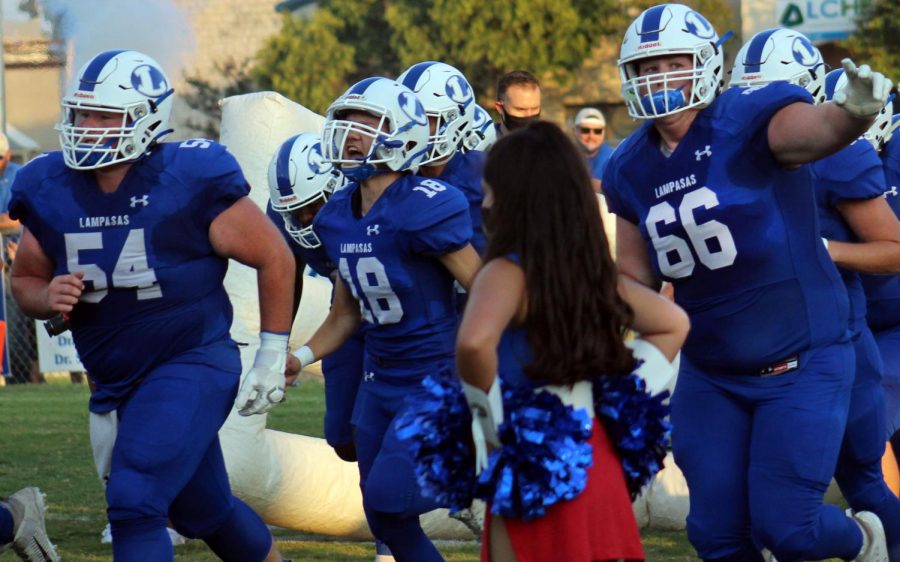 The football team runs through the tunnel to enter Badger Field for the first game of the season Aug. 28. The Badgers beat the Brownwood Lions 55-23.

The Badger football team has not lost a step. They defeated the Brownwood Lions 55-23 in a blowout game in the first game of the season Aug. 28. Football in Texas is back for 4A and below.

It was also senior night and there were 23 total seniors.

The football team practiced hard all week leading up to the season opener at Badger field.

¨I think the game [Friday night] went awesome,” assistant principal Paul Weinheimer said. “You know, the football team was talking about being grateful and I really think you could see that in their play. They really appreciate every down they get to play right now, because you don’t know about next week. The governor could always come back and say ‘no games and no school,’ so every week could be their last one and they played like that I thought. It was awesome.”

There was only 50% capacity allowed in the stadium due to new UIL  rules to try to control the rapidly evolving Covid-19 situation.

Running back Jack Jerome ran for 199 yards and got the first Badger touchdown of the year on Friday night and passed the 3,000 yard mark as well.

The Lions botched their kickoff and senior defensive back Connelly White recovered the ball for the Badgers.

The Badgers then found the end zone again in the second quarter with 11:41 left. Badgers were up 14-7. The Lions then came and scored but failed with a two point conversion making the score 14-13.

The Badgers then scored again on their next drive with Whitehead calling his own number from only 4 yards deep to put the Badgers up 21-13. Only thirteen seconds later the Lions fumbled the kickoff. Badgers senior linebacker Keagan Richardson recovered the ball.

Both teams accounted for a total of eight touchdowns in the first half. When they went into halftime the score was 35-20.

Whitehead finished 13 out of 19 passes and went for 104 yards in the season opener.

Lampasas held the Lions to only 3 points in the second half when the Lions kicked a field goal.

“I think that as an O line we did really good but still have a lot of work to do to get better each week,” Waldrip said.

Fans were enthusiastic with how the team played Friday night.

¨I liked how they looked and I think that the players were ready to be back since being out because of Covid and I think they played well,” spanish teacher Elma Garnett said.

The players were optimistic about how the game ended and look forward to the next game.

“I think we were definitely the more physical team on Friday and it showed in the final score,” Waldrip said.

The next game is Friday at Tarleton State University football stadium in Stephenville. The Badgers face the Stephenville Yellowjackets at 7:30 p.m.

“I think the fans will follow them to Tarleton because it is a bigger stadium and there will be more room and tickets, I believe, but I don’t know how many,” Weinheimer said. “I know a lot of people will be wanting to follow the team.”