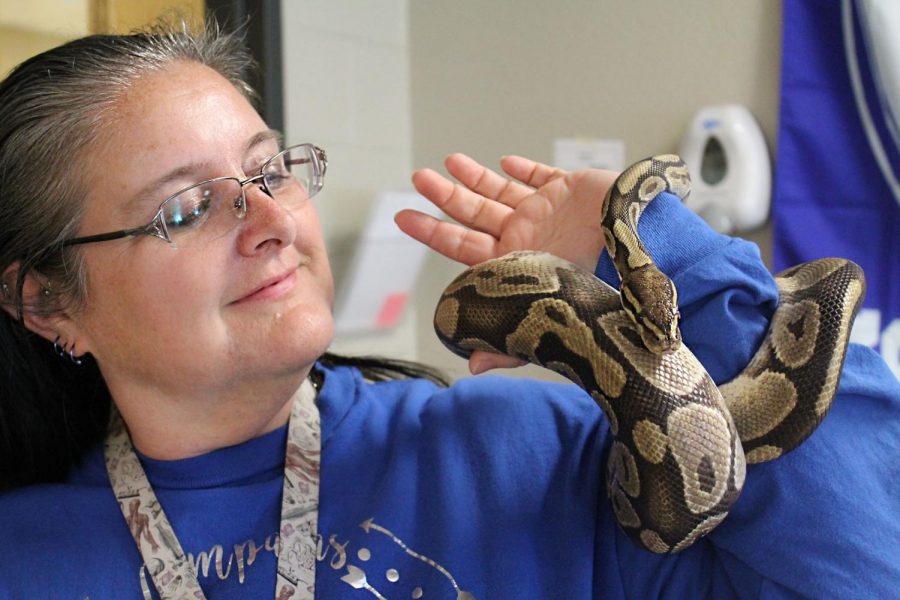 Smooth, shiny scales glisten in artificial light as a snake lazily creeps around it’s glass enclosure. A large bearded dragon basks in the yellow light mounted on the wall of the enclosure set beside the serpent, its rough feet grasp on the branch below it. Just a floor down, another snake rests in a coil in the corner of its enclosure, with its thin forked tongue flicking out occasionally.

Economics and psychology teacher Kiff Weimers keeps a snake in his room as a class pet, and science teacher Dejah Bushong owns a snake and a bearded dragon in her room.

“Classroom pets always seem kind of like fun,” Weimers said. “If kids are interested and kids want to come into your class, then it’s a win.”

Weimers had a snake before, but he received a better offer last year, a Californian king snake he named Apollo.

“I had a snake before, and I made a trade with a former student who gave me an uptrade,” Wiemers said. “One of my students just picked the name. I hadn’t had a name for a while, and so I felt bad. She felt bad so she just said Apollo. I was like, ‘I like Greek mythology,’ done.”

Bushong had her start with her bearded dragon, Molecule, when she was teaching eighth grade science.

“I wanted to keep a pet in my classroom to keep the kids interested,” Bushong said. “When I taught eighth grade science we would work her into physics problems, and she just kept them a little more interested, and the students all like to hang out with her.”

Bushong also has a ball python named Barrie, which she inherited from a teacher that did not take the snake when they left.

“The older I have gotten, the more I’ve been able to handle them, the more I like them, so I have wanted one for a while,” Bushong said. “I had to wait a little bit until my kiddos were a little bit older, though, because when they’re little they don’t know the difference between a snake it’s ok to touch and a snake that is outside that it’s not ok to touch.”

To some, reptiles can be frightening and off-putting, but sophomore Serena Resh has both Bushong and Weimers and enjoys the animals.

“It makes me happy and reduces stress,” Resh said. “I have held the bearded dragon. I would love to hold the snakes some time.”

“Learning to be gentle around these creatures and sympathetic to them, carries over to our classmates,” Resh said. ”It’s a huge bonding experience between the students, their peers and their teachers. It gets people excited to come to class, and more interested in the lesson when you have a live example.”