In My Mother’s Arms 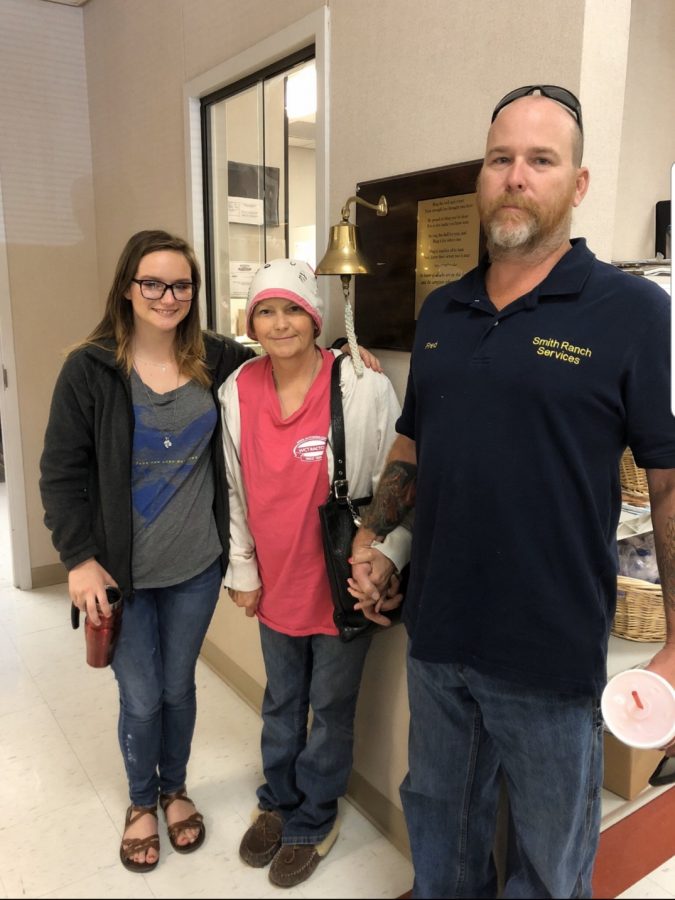 At the age of 53, my mother was diagnosed with stage four diffuse large B-cell lymphoma, an aggressive type of non-Hodgkin’s lymphoma. Lymphoma is a type of cancer that attacks the lymphatic system or more specifically the lymphocytes which are found all throughout the body.

“I knew there was something wrong in September of 2017, when I was having kidney pain, but I didn’t know it was cancer,” my mother Julie Bass-Smith said. “I thought it was kidney issues.”

I started noticing some serious issues when she developed edema in her legs. Edema is a medical condition characterized by the retaining of fluid in the skin’s tissues. A major surgery was scheduled to correct the issues for her kidneys when another hospital discovered the cancer. Luckily, they found the cancer first, because if they had started the surgery, the doctor could have cut into the tumors which possibly could have killed her.

“I found out two days after I graduated from college that I had cancer,” Bass-Smith said. “All five doctors walked in and said ‘Hey, by the way, you have cancer’ and then I had to call my husband Fred and say that I have cancer.”

My mother was showing signs of kidney failure, so the doctors put in nephrostomy tubes that would help drain her kidneys, helping to unblock them. Nephrostomy tubes are small and enter through the back into the kidney(s) usually connected to a small bag that collects the fluids from kidneys.

“My first response was shock, and then I had all weekend to mull it over, and then I cried a lot ‘cause they had no clue,” Bass-Smith said. “So then I went to my doctor’s appointment and I just walked in the door and I didn’t even sit down. I just stood there at the door and I just looked at my doctor and I said ‘Dr. Campbell, am I going to die?’ And he looked at me and he said, ‘No.’”

I just stood there at the door and I just looked at my doctor and I said ‘Dr. Campbell, am I going to die?’ And he looked at me and he said, ‘No.’”

The doctor’s answer gave my mother enough hope to face the serious treatment in store for her.

“I wasn’t going to sit there and go through torture, or whatever, if he was going to say ‘oh you’ve got three months,” Bass-Smith said. “Why go through all that chemo and bullcrap if you’re going to die anyway, right? Might as well go out and live your life and do your own thing, enjoy the last bit of time you have,”

My mother’s biggest fear of death was gone, but soon after, her next challenge arrived: Chemotherapy. The way chemo works is it kills fast-growing cells, good and bad. My mother also had to take medication to regenerate her white blood cells which was expensive ($18,000 per dose) and came in a special on-body injector.

It took awhile, but a week or two after her second round of chemotherapy her hair started to fall out.

My mother’s medical history does not even start with her cancer. It started with her first major horse accident in 2006 when she blew two discs in her back. The night of the accident, she went to the hospital but was assured everything was alright. Years later, she had to get surgery to repair the damage, which caused her to become paralyzed from the chest down and lose the ability to walk. She eventually learned how to walk with extensive physical therapy over a period of 18 months in three separate hospitals.

This experience prepared my mother for the large amount of time she had to spend in the hospital due to cancer, even though it is never easy.

“Well, it sucked,” Bass-Smith said. “I kept myself entertained. I’ve been in the hospital before, for four months, when I was paralyzed, so it’s not like I didn’t try to keep myself entertained. I’m not going to sit there and get all down, because luckily you guys were close by. You’d come visit me and, you know, Fred would come visit me every day.”

My mother has had many near-death experiences, but more than others, this one opened up her eyes to the reality of her situation.

“Of course I’m scared,” Bass-Smith said. “It’s a scary thing. 50-some-odd-years-old and think you’re going to be dead…When I found out I had cancer I was like God, really, you know, I might just be dead by the time I’m 60.  This sucks.”

My parents separated when I was young and my stepfather has been there for my mother through so much and we are grateful to have him in our lives. He always has so much love and passion for my mother and I feel he always knows exactly what to say, especially about my mom getting cancer

“[I was] concerned because you never know what’s going to happen,” my stepfather Fred Smith said. “You don’t know what kind of cancer, whether it’s the kind that kills people or the kind that don’t, so obviously concerned, scared, all them feelings. I love your mother and I don’t want to lose her.”

I love your mother and I don’t want to lose her.”

My mother has six children, ages ranging from 16-33, and three grandchildren. She was terrified thinking about having to leave us.

The effects of the cancer did not stop after the treatments. My mother continues to struggle with kidney problems to this day. She has been in remission for nearly a year now and her doctor is considering surgery to repair the damage to her kidneys and ureters caused by the cancer.

“The cancer was so big in my abdomen that it was pushing on the kidneys and ureters,” Bass-Smith said. “It was causing constant friction on the tubes that lead from the kidneys to the bladder and causing inflammation which caused scarring. Although I’ve been in remission for almost a year, I’m still having issues with my kidneys that have been going on for three or four years now.”

My mother has beaten cancer and is in remission, but the ghost of her fears still lingers.

“We’re dying every day, but to sit there and know that you [may have] six months then you’re gone, that’s a real eye opener,” Bass-Smith said. “If somebody were to tell you that, that’s when your time becomes really precious.”

“I’ve been through worse, you know, being paralyzed, and I’m walking again,” Bass-Smith said.

In the cancer center there is a bell and a plaque on the wall for those who have had their last chemo sessions, and my mother had the opportunity to ring the bell and read the plaque.

“When you ring the bell you’re hoping that’s the last one, because they said six treatments,” Bass-Smith said. “So I was like, ‘Well, okay I hope this works. Ring the bell and this will be my last chemo, so you do your bell and you pray between that bell and your visit to your doctor, because that’s when it really counts.”

Seeing my mother ring that bell, not only brought closure to me, my mother and our family, but also encouraged the other chemo patients in the treatment center.

“The bell is great,” Bass-Smith said. “I actually think the bell is hope for the other people who are sitting in the chairs.”

Before ringing the bell that signified her treatment was over and she was cancer-free, my mother read the plaque that hangs by it. She will never forget the words, and neither will I.

“Ring the bell and cheer,” the plaque said. “Your strength has brought you here. Be proud of what you’ve done. For in this battle you have won. So ring this bell for you, and ring it for others too. Ring it loud for all to hear, and know their victory too is near. In honor of all who are on this journey and the caregivers who walk with us.”

4 Responses to “In My Mother’s Arms”