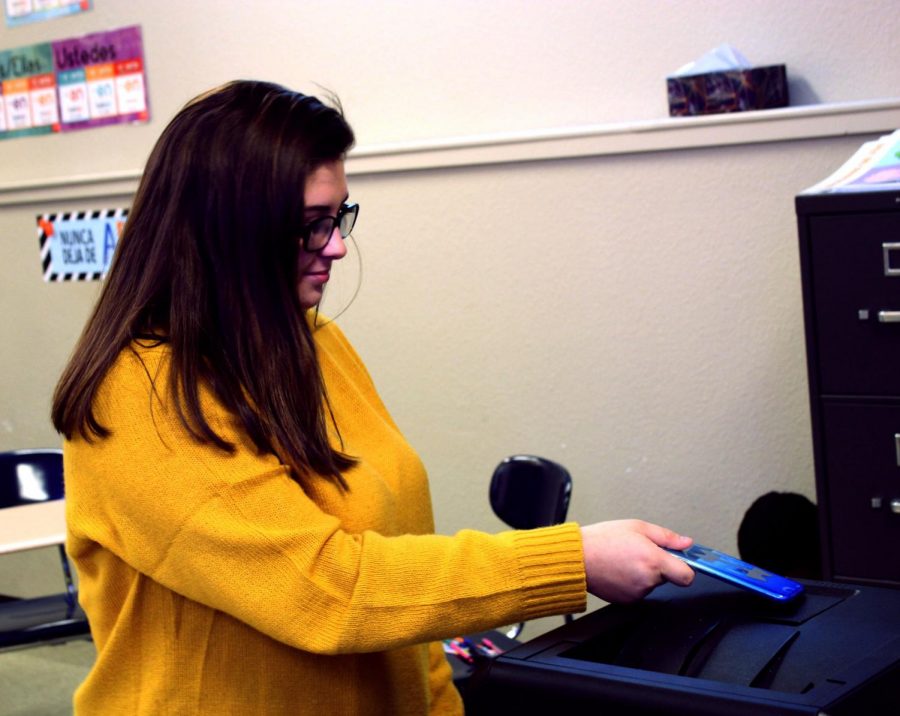 Freshman Leanna Rivera sets her phone on Spanish teacher Ms. Stednitz's printer before going to the restroom during 8th period on Aug. 30.

Cell phones in the bathroom are now prohibited, due to a new school rule.

“I really like the rule because it seems to be working,”Assistant Principal Duane Young said. “There’s less students in the halls.”

The rule is to control students and to prevent them from wasting class time. While some students disagree with it, some do agree with the policy, like freshman Samuel Zmolik.

“I honestly understand it because teachers don’t want students spending their whole time in class in the bathroom,” Zmolik said. “I think it is deserved but I think they should have forewarned us before we came on the first day and take our phones.”

Even though there is some disapproval, English teacher Alison Brayton likes the rule, and thinks of it as an improvement.

“Even though there are some people where it was totally not a big deal, there were a couple of habitual people who were constantly on their phones, out there in the hallway for maybe twenty minutes every day or at least once a week,” Brayton said. “So it has cut that down, and even though it might not feel fair to the people who were not abusing it, I think it has solved the problem.”

Senior Jarrod Turner is completely against the rule, and only believes it fair because it was not his decision and he cannot change it.